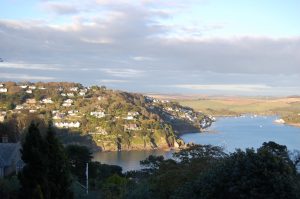 The stunning Devon scenery at its finest in the Salcombe estuary

Devon scenery is amongst the most splendid to be found anywhere in England.

Devon is a beautiful county in the South West of England known for its appeal to holiday makers and tourists alike. Devon scenery is a mix of glorious rolling hills inland, picturesque villages and hamlets and open wild expanses of countryside. The charming city of Exeter is the county town. But there are many other old and appealing market towns to explore, which are all part of the Devon scenery.

Devon has a unique claim among English counties

Devon is unique as the only English county that has two separate coastlines (north and south). The county is perfect for outdoor enthusiasts with not only miles of coastline to explore and enjoy, but also the vast expanses of Dartmoor and Exmoor national parks too. Dartmoor is the largest open space in the south of England measuring 954 square kilometres (368 square miles) – an area of outstanding national beauty and a place that inspires and excites many.There are miles of public footpaths and bridal ways. The economy of Devon is closely aligned with tourism and has plenty to offer.

Both the north and the south coastlines are characterised by high cliffs and many sandy beaches and shorelines. There are numerous examples of picturesque Devon bays that are fishing harbours and small ports, such as Brixham. Away from the coast, Devon is rural and green, hilly and undulating.

The population density of Devon is low in comparison with other English counties and much of the land is turned over to farming.