Photos of Chipping Campden, one of the Cotswold’s jewels [slideshow gallery_id=”23″]

Chipping Campden is a small Gloucestershire market town on the tourist trail within the Cotswolds, an area known for its natural beauty. With an historic, terraced High Street that dates from the 14th century, Chipping Campden was a rich wool trading centre in Medieval times. The town enjoyed the patronage of wealthy wool merchants. In 1970 Chipping Campden High Street was officially designated a conservation area to preserve the ancient town for centuries to come.

The popular tourist town’s high street that has been barely touched over the centuries is lined with honey coloured Cotswold stone. 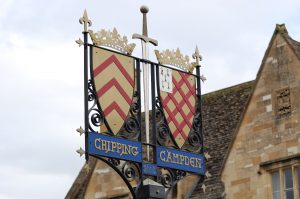 The welcoming sign in the centre of Chipping Campden Gloucestershire.

One of the most eye catching structures in the town centre is the Market Hall, built in 1627. Its purpose was quite simply to provide cover for the local produce market. Step inside and admire views through the stone arches that are unchanged over hundreds of years.

In St James’s church, Chipping Campden boasts probably the finest wool church in the Cotswolds. The church tower measures 120 feet. The church itself is noted for having one of the oldest altar tapestries and largest brass in England.

Chipping Campden has another notable claim to fame. Dover’s Hill, set high above the town has recently celebrated its 400th anniversary of what is known affectionately as the Cotswold Olympicks. One of the most famous events is the famous shin-kicking contest, which is eagerly awaited and contested!

The official guide to Chipping Campden