Just a mile off the Fosse Way lie The Slaughters, located close to the beautiful and notable Cotswolds towns of Stow-on-the-Wold and Bourton-on-the-Water. Arguably the prettiest and aesthetically pleasing two villages in the Cotwolds, The Slaughters comprise Lower Slaughter and Upper Slaughter. The two villages are just a couple of miles apart.

The Slaughters both nestle on the banks of the River Eye, an idyllic small river that wends its way peacefully through the two villages. Most people automatically assume that the name is dervied from the slaughter of animal, but in face it derives from the old English word Slohtre meaning a muddy place. Indeed The Slaughters are old enough to have been mentioned in the Domesday Book. 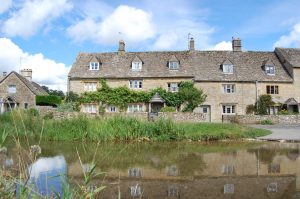 The Slaughters are quintessentially English

Both villages are the essence of what people imagine the Cotswolds to be and are a major draw for visitors and foreign tourists. Mellow and elegant Cotswold stone houses either side of the river are a feature.

The Old Mill at Lower Slaughter is worth discovering. Although no longer a working mill, the paddle wheel still turns and the building is now a museum.

Lower Slaughter boasts a most pretty church. The church of St Mary was rebuilt in 1867. However some of the features date back to the thirteenth century. The church of St Peter’s in Upper Slaughter is equally pretty. Set up on the hillside, parts of this historic Norman church date back to the twelfth century. Noted writer, Francis Edward Witts, who authored ‘Diary of a Cotswold Parson’ was rector of the Slaughters between 1808 to 1854.

The Slaughters are a place to spend some quality time and are guaranteed to inspire you.