A spectacular moated manor house, now run by the National Trust, Baddesley Clinton is situated not far from the historic town of Warwick. The site is a Scheduled Ancient Monument and the Hall is a Grade I listed building. 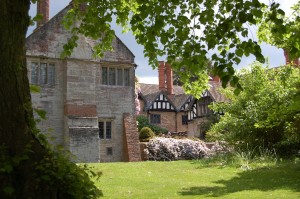 Baddesley Clinton boasts an illustrious past

According to Wikipedia, the history of Baddesley Clinton is as follows: In 1438, John Brome, the Under-Treasurer of England, bought the manor. It then passed to his son, Nicholas, who is thought to have built the east range, which is the main entrance. Nicholas is also responsible for the extensive rebuilding of the nearby parish church dedicated to St. Michael, done as penance for killing the parish priest, a murder reputed to have taken place in the great house itself. The house from this period was equipped with gun-ports, and possibly a drawbridge. When Nicholas Brome died in 1517, the house passed to his daughter, who married Sir Edward Ferrers (High Sheriff of Warwickshire) in 1500. The house remained in the ownership of the Ferrers family until 1940 when it was purchased by Thomas Walker, a relative of the family who changed his name to Ferrers. His son, who inherited it in 1970, sold the estate in 1980 to the National Trust.

Baddesley Clinton is a gem of a property and absolutely worth a visit.