From their inception in 1899 as an industrial revolution highway to ferry goods around the canals, Hatton Locks is these days available to all as a recreational venue with a difference. Part of the Grand Union Canal, it was originally known as the Warwick & Birmingham Canal. Its sole purpose in those days was to carry locally mined Warwickshire coal to the power stations and factories of the Black Country. The 21 locks that comprise Hatton Locks span less than 2 miles of canal and has a total rise of 45 metres. 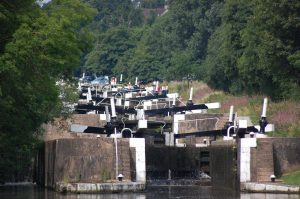 In 1929, the canal was renamed as the Grand Union Canal and the decision was taken to widen the stretch by Hatton Locks. The flight became known as the stairway to heaven because of the difficulty of navigating the flight and the subsequent easier journey to Camp Hill.

The work to widen Hatton Locks began in 1932 and involved the use of revolutionary new material known as concrete. Hundreds of men worked on the project and the widend stretch was officially opened by HRH the Duke of Kent a couple of years later.

Hatton Locks is a perfect spot to while away a lovely English summer’s afternoon. There is even a well stocked cafe as well.